With over 15-million subscribers and 16-billion views, Little Baby Bum is nothing short of a YouTube sensation, capturing the imaginations of children across the world. Acclaimed children’s theatre and television writer and director, Miranda Larson, (who also wrote and directed The Night Pirates for the Rose last year), has brought the digital world of Little Baby Bum to life on stage with her latest production, Little Baby Bum Live which comes to the Rose from Mon 30 – Tue 31 Jul.

How did you first become involved in theatre for children?
I left university and almost fell into local children’s theatre, putting on shows with kids and for kids during the school holidays. With me being a big kid myself it became a natural fit. I’ve always had a passion for theatre and working with children, capturing childhood and bringing that out in a show clicked. So, whether it’s children’s theatre or television it’s all I’ve done since!

What is it about theatre created specifically for young children that makes it so special and fascinating for you?
I think it’s about connecting with their imaginations and individual creativity; that magic of childhood. Children younger than seven specifically are in pre-logical phases of development so anything and everything is possible, which means the characters of Little Baby Bum really are coming to life on stage for them.

So why is theatre so important for children of this age?
It’s important in terms of play and allowing a child to be a child; to be inspired, feel included, use their imagination and love song and dance. In all of the shows I do I never expect children to sit down and quietly watch, everyone is expected to stand up and dance and make as much noise as you want. You’re a child, be a child!

With an extensive resume of popular children’s television and theatre behind you, what was it about the Little Baby Bum world that drew you to this project?
When I first watched Little Baby Bum on YouTube, it was the characters, the community and the bright engaging look of it that I immediately fell in love with. I knew there was something exciting we could do with the characters, who children know and love already.

Why do children adore these characters and their videos?
As human beings, regardless of our age, we all connect through character because it is emotion to emotion – how they look, react, and move. So in Little Baby Bum Live I wanted to bring out that heart to the community, the friendships among the characters and build on the dynamic which already exists in the animated videos and has captured the imaginations of so many children.

Among the hundreds of videos from Little Baby Bum we meet lots of engaging and colourful characters, who will we meet on stage?
You’ll get to see the classic favourite characters from YouTube like Mia, Jacus, Incy Wincy, Baa Baa, Stan, Old Mac and more, plus we’ve got some new characters like Betsy, the farmer’s wife, a Mayor of Little Baby Bum.

Now that you’re fully immersed in the world of Little Baby Bum, have you found a personal favourite character or song?
Oh goodness! It changes every day I think. For a long time I had Wise Old Owl stuck in my head and yesterday it was Ring-a-ring ‘o Roses and before that The Wheels on the Bus. As a grown-up coming to see Little Baby Bum Live you’ll know the songs and be singing along too! I don’t have a favourite character but whilst writing the show I really enjoyed Stan the Monster, and I’m loving Incy Wincy now we’re bringing them all to life too.

With the characters being just one element of Little Baby Bum Live, what else have the team been doing in order to build the Little Baby Bum world on stage?
Right from early on the producers, myself and Barney George and Timothy Bird (the designers of the show) knew we wanted an interactive screen as our backdrop, which we would fill with the Little Baby Bum animation – as the YouTube videos are all animated and that is what it is known and loved for. However, at the same time we didn’t just want a flat screen of animation so our screen becomes alive, with doors opening within it so that characters literally step out of the animated world and into real life.

So what can audiences expect when they come and see the show?
A lot of liveliness, they’re definitely not going to be bored! There’s a lot of participation, we want it to be a really inclusive atmosphere for children, particularly as this might be their first experience of theatre. We’ve kept the elements of education; counting, colours, directions and crossing the road as well. Little Baby Bum Live is lively show, using incredible animation techniques on stage alongside the real characters with plenty of dancing and singing for young audiences to enjoy. 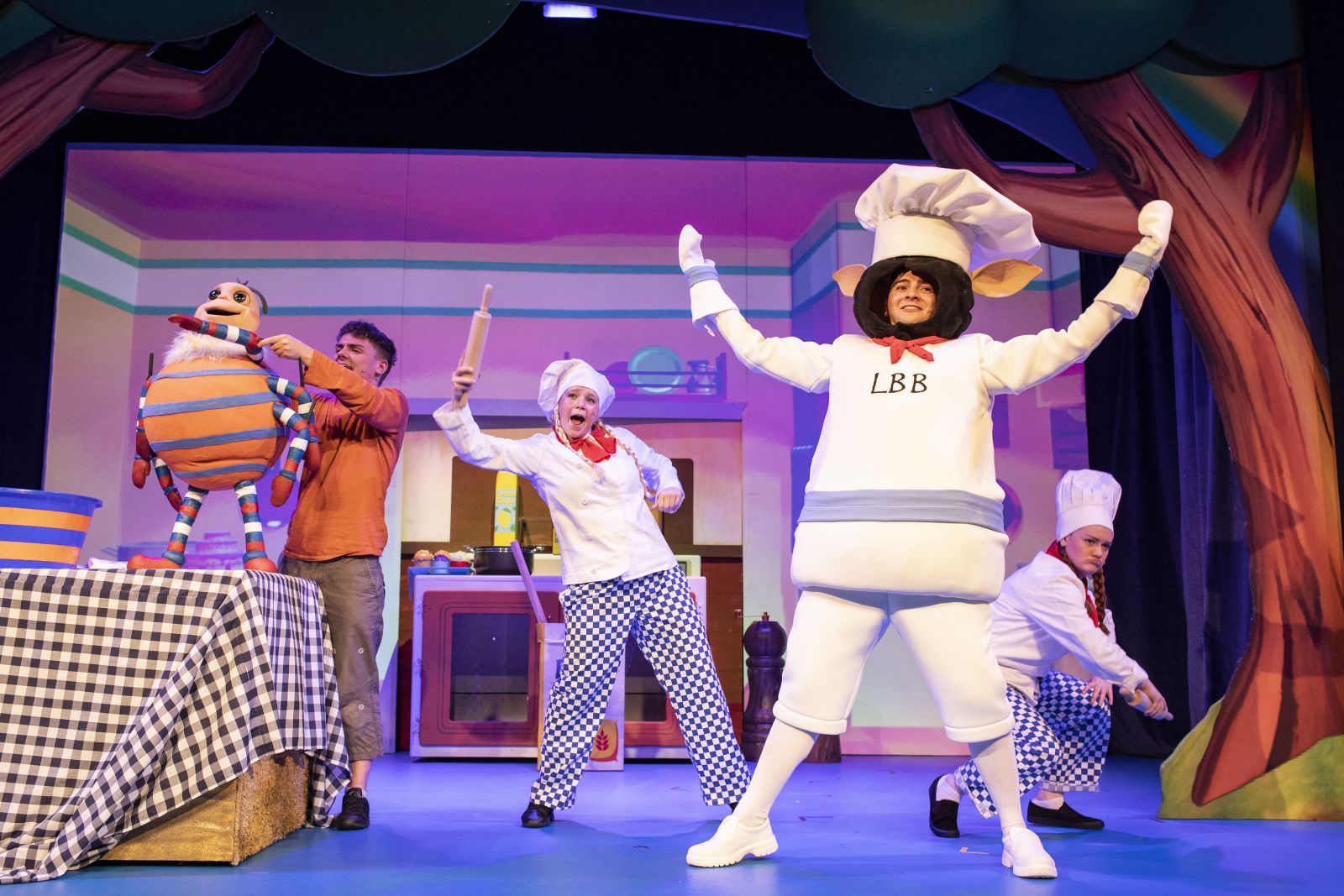