Izzy Kabban joins the freelance workforce on behalf of the Rose 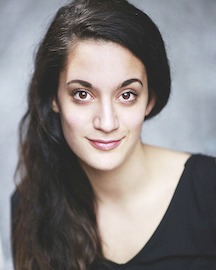 We are delighted to announce that Isabelle Kabban will be joining the freelance taskforce on behalf of the Rose Theatre. Izzy has made a hugely valuable contribution to our Learning and Participation department as a facilitator and workshop leader since 2017. She is also a very talented writer and performer in her own right.

As with all the other theatres contributing to the taskforce, we have been asked to be transparent about the way we recruited for this role. When the idea was first suggested by Fuel Theatre, there was a strong sense of urgency to recruit people quickly so that everything could get up and running as soon as possible. We decided therefore not to run an open recruitment process and instead to focus on choosing someone who was well known to us, who we thought would make a strong contribution to the taskforce and for whom we thought that it would be a good learning and development opportunity in its own right. We also wanted to ensure that the opportunity provided some much needed extra cash for a young artist who had seen their income significantly reduced due to the current crisis.

In all these respects, Izzy felt like the perfect match. We are looking forward to learning about the taskforce’s activities from her but we also want to emphasise that we do not see it as her job to be a representative for the Rose in any formal capacity – we are supporting her in her capacity as an autonomous freelance artist and are keen for her to think and act independently of us.

(Banner image from Izzy's solo show LOVE (Watching Madness), which played at The Pleasance in Edinburgh in 2019 and VAULT Festival in London this year)