'The Rose has suddenly bloomed. Makes much of London theatre look slow-witted and slow-eyed' The Observer

'Fine dark comedy about addiction, art and misogyny' Time Out

'A production with plenty of heart and humour' Evening Standard

Click here to see what our audiences said about the production.

Harry Lloyd (Marcella, Game of Thrones) leads the cast as Jack with Freya Mavor (Skins, The White Queen) as Annie. Following rave reviews for his first novel, Jack is on the verge of signing a multi-million-dollar deal with a leading publisher. With his wife Annie struggling with addiction and mental illness, will she cope with the public scrutiny that comes with success?

Set in New York, Good Canary is a hard-hitting play exploring the spiral of self-destruction and the cost of creativity.

Californian writer Zach Helm has spent years honing his craft in Hollywood and establishing himself as one of the most interesting and promising writers and directors of his generation. His work includes Mr Magorium’s Wonder Emporium, Stranger Than Fiction starring Will Ferrell and Dustin Hoffman, and the forthcoming Jumanji.

Oscar Award nominee John Malkovich’s extensive film career includes Places in the Heart, Dangerous Liaisons, In the Line of Fire, Being John Malkovich and Burn After Reading. His Broadway directing credits include Arms and the Man in which he also performed and The Caretaker. 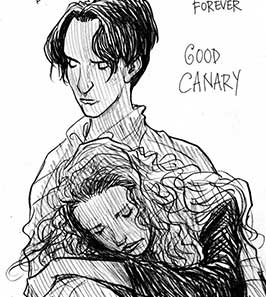