'Ingenious... gives Matilda a run for its money' Daily Telegraph

From best-selling author Jacqueline Wilson, the tale of plucky Hetty Feather is brought thrillingly to life on stage in this Olivier Award nominated production. Following a sell-out West End run, Hetty returns home to the Rose Theatre. With beautiful storytelling, original songs and live music, spectacular circus and a huge heart - this is a terrific adventure story and the perfect treat for the
whole family. Don't miss this five-star production that's delighted audiences and critics alike.

If you're watching the show on Fri 26 Feb, join us for a Q&A session with the cast after the performance.

Listen to or read the notes for this production:
Audio Notes
Written Notes 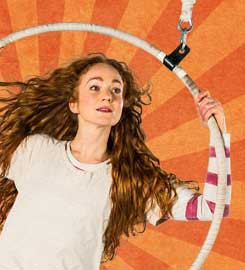